Gamer's Gambit stores in Connecticut and New Jersey are now history, but this fan will always love games. This blog is an archive of the many events and reviews of games enjoyed over the seven years during the stores' heyday. This post is a referral to all sorts of game and comic fun. The following links go to web pages that will let you put in your zip code to find a local game store carrying the types of games or comics you're looking for or to websites of interest to gamers (links will open a new tab):

Your kid wants to play Pokémon

The Pokémon Trading Card Game is a 2-player game in which players use 60-card decks to battle. In the Pokémon TCG, players build decks around cards that feature Pokémon characters and then take turns using attacks to try to defeat their opponent. The game requires some strategy and planning to win.

Game stores hosting Wizards of the Coast games, including Magic The Gathering or Dungeons & Dragons

Store locator for WizKids miniatures and board games

Warhammer Community for most of the games produced by Games Workshop.

#BackTheComeBack to show your support of local game stores in your neighborhood.

This blog or post is not associated with any of the above link destinations and receives no compensation for these referrals. Hope this helps!
Posted by Zoot SD! at 9:44 PM
Email ThisBlogThis!Share to TwitterShare to FacebookShare to Pinterest

Thanks to all who participated in the MTG Modern PPTQ Dublin $1K held Saturday, September 17, 2016, at Dragon's Den in Poughkeepsie, NY. Congratulations to our top 8 finishers, who all won prizes, and to the first place finisher, Paul Mendez, who won $400 and an invite to the Regional PTQ! Here are the winning deck lists of the top eight finishers:

Posted by Zoot SD! at 9:24 PM No comments:
Email ThisBlogThis!Share to TwitterShare to FacebookShare to Pinterest

Thanks to all who participated in the Magic: The Gathering Standard Preliminary Pro Tour Qualifier (PPTQ) Honolulu $1K held Saturday, June 4th 2016, at Dragon's Den in Poughkeepsie, NY. Congratulations to our top 8 finishers, who all won prizes, and to the first place finisher, Jack Ma, who won $400 and an invite to the Regional PTQ! Here are the winning deck lists of the top eight finishers:

Posted by Zoot SD! at 2:39 PM No comments:
Email ThisBlogThis!Share to TwitterShare to FacebookShare to Pinterest

Thanks to all who participated in the Yu-Gi-Oh! Prize Card Tournament held Saturday, April 30, 2016, at Gamer's Gambit in Danbury, CT. Congratulations to our top eight finishers and to the first place finisher, Paulie Aronson, who took home the Super Rare Ascension Sky Dragon! Here are the winning deck lists of the top eight finishers:

Posted by Zoot SD! at 5:24 PM No comments:
Email ThisBlogThis!Share to TwitterShare to FacebookShare to Pinterest

I know by now everyone is sick of the same old song and dance you see in the Top 8 of every tournament, especially if they’re all going to be filled with the Lovecraftian horrors that Oath of the Gatewatch brought to the forefront of everyone’s mind. The point of this article isn’t going to be to rehash those same lists, but to bring a breath of fresh air to your Modern deckbuilding process.

The first deck I want to go over is Modern’s spin on a much loved, yet very feared mechanic: Dredge. This deck operates a bit like it’s Legacy counterpart: get as many cards as you can in the graveyard, throw some undead at your opponent, and finish them off in a blaze of glory. The only difference with this deck is that you also want a whole lot of cards in your hand, to fuel your alternate win-con: Conflagrate!

There’s a lot of pretty sweet stuff going on in this list, including a bunch of cards that you likely don’t see on a day to day basis; stuff like Vengeful Pharaoh and Squee, Goblin Nabob. They’re all here to serve a greater purpose though, don’t worry. The general goal of this deck is to dredge as many cards as you can into your graveyard in the early game with powerful dredgers like Golgari-Grave Troll and draw spells like Faithless Looting, to get incremental advantages from cards like Bloodghast and Lingering Souls.

While you’re playing the beatdown, there are still a bunch of ways to hold other decks at bay. With the 2-mana black enchantment, Zombie Infestation, you can either continue applying pressure with the cards you’re sure to have in hand, or make some blockers at instant speed; nothing screws up your opponent’s combat math like creatures showing up out of nowhere! Vengeful Pharaoh is another card that needs a particular home to really shine, and that home is here! It isn’t hard to incidentally mill one into the graveyard, and once it gets there once, it will just keep triggering and repeating its ability. There’s nothing quite like a kill spell that repeats itself and requires exactly 0 mana.

So now that we’re past the fluff, we can get to the real core of the deck. After turns of reloading on Bloodghasts and poking your opponents with Lingering Souls, you’ve reached the turning point. You’ve got 7 cards in hand including 2 Life from the Loams, and a Squee and a Conflagrate in the graveyard, and your opponent is ending their turn at a respectable 13 life. You studiously remember your upkeep trigger on Squee, and draw for turn. Your Loams each net you 3 lands, bringing your hand size up to 13 cards. If you’ve been following along, that’s conveniently your opponent’s life total, and it’s also convenient that that’s how much damage your Conflagrate is currently burning into them. That’s where the true magic in this deck lies; it tricks your opponent into thinking that your creatures are important, when you really just wanted to combo kill them.

The other deck I want to feature today is a pet project of mine, and is centered around my favorite card of all time: Monastery Mentor. I had been playing an Esper version of this deck for quite a while to some success, but I think that this deck has a chance to shine again if we can provide some changes based on past experiences. In this case, that translates to adding a 4th color to the deck entirely, and cutting some of the less consistent pieces. I’ll go over the basic premise of the deck, but here’s the current iteration: 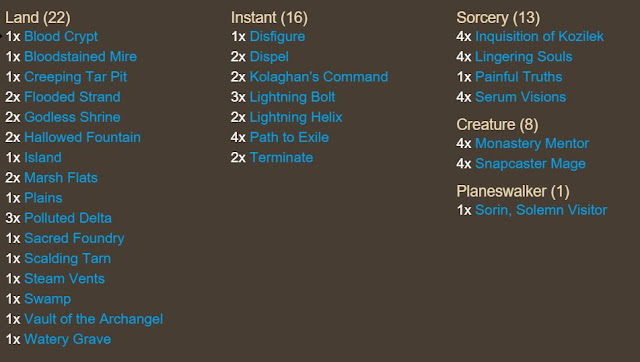 It's effectively a 4c good stuff deck that wins with Lingering Souls most of the time, but I think this version is probably better than the original Esper version; the red provides reach with Lightning Bolt and Lightning Helix, and recursion of threats like Monastery Mentor and Snapcaster Mage with Kolaghan's Command. The red splash also provides more sideboard options and other possible threats like Pia and Kiran Nalaar, and cards to shore up the original worst matchup: Tron. Being able to recur Fulminator Mages with Kolaghan's Command or even just the ability to toss in Crumble to Dust should prove pretty useful, as I'm fairly confident that Tron will make a pretty big resurgence once the Eldrazi Menace recedes.

The most difficult parts of playing the deck are the manabase (4 colors, ridiculous right?), and the deck's seemingly conscious desire to draw lands past turn 5/6. I might switch the Vault of the Archangel to a Desolate Lighthouse so I can loot away extra lands, or I might just play a second Painful Truths. Making decisions is hard sometimes. If you guys have any suggestions, feel free to let me know.

I think the biggest strength of this deck is that it plays a lot like Jund, except that we can be a bit more flexible since we’ve got card selection in Serum Visions, and the ability to cast any of our instants or sorceries a second time with Snapcaster Mages. Besides that, we’ve frankly got as much removal as them anyway. Decks like these tend to do pretty well, as they’ve got game against pretty much the entire field, and they don’t straight up crumble to any side board silver bullets like a lot of decks can.

I think that both of these decks are poised to do pretty well once Shadows over Innistrad comes around, and brings a whole new Banned & Restricted list with it. The life span of the Eldrazi is nearly at its end, and who knows, we might even get some new toys to play with when April rolls around.

Written by: Zane Knapp
Posted by Zoot SD! at 10:07 AM No comments:
Email ThisBlogThis!Share to TwitterShare to FacebookShare to Pinterest
Older Posts Home
Subscribe to: Posts (Atom)