Gamer's Gambit stores in Connecticut and New Jersey are now history, but this fan will always love games. This blog is an archive of the more than 200 events, news, and reviews of games enjoyed over the seven years during the stores' heyday. This post is a referral to all sorts of game and comic fun. The following links go to web pages that will let you put in your zip code to find a local game store carrying the types of games or comics you're looking for or to websites of interest to gamers (links will open a new tab): 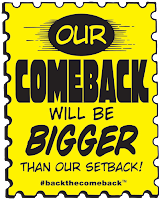 #BackTheComeBack to show your support for local game stores in your neighborhood!

Your kid wants to play Pokémon

The Pokémon Trading Card Game is a 2-player game in which players use 60-card decks to battle. In the Pokémon TCG, players build decks around cards that feature Pokémon characters and then take turns using attacks to try to defeat their opponent. The game requires some strategy and planning to win.

Game stores hosting Wizards of the Coast games, including Magic The Gathering or Dungeons & Dragons

Store locator for WizKids miniatures and board games

Warhammer Community for most of the games produced by Games Workshop.

This blog or post is not associated with any of the above link destinations and receives no compensation for these referrals. Hope this helps!
Posted by Zoot SD!